5 Historical Sites in the Smoky Mountains not to Miss

Formed some 100 to 200 million years ago, The Great Smoky Mountains are full of history and showcase some of the earliest settlements and how people lived many generations ago.

Before the first European settlers arrived in the Great Smoky Mountains, the area was occupied by the Indian tribe known as the Cherokee.

Here are 5 of the most historical and interesting sites to visit on your next vacation to the Smoky Mountains.

Probably the most visited places in the Smoky Mountains is Cades Cove. This popular destination is full of history dating back to the 18th and 19th centuries. The first permanent settlers arrived in Cades Cove in 1818. There are many than 12 historical sites in Cades Cove including log cabins, barns, cemeteries and primitive structures.

Around 1800 - 1810 the first settlers arrived in “White Oak Flats,” which today we know as Gatlinburg. Roaring Fork was inhabited shortly thereafter, mostly because of its rushing river and fertile farm land. Today more than 5 historical structures can be found along the Roaring Fork route that is accessed just outside of downtown Gatlinburg. These include homes, barns, well houses and primitive structures used by the early settlers.

In 1908, Elkmont was established by the Little River Lumber Company as their main headquarters for logging the timber-rich Smoky Mountain area. In 1910, the lumber company began selling prime tracts of land to prominent businessmen in Knoxville, Tennessee and in 1912 the Wonderland resort hotel was constructed. Today, more than 18 historical structures remain standing in Elkmont, preserved and managed by the park service.

Effectively established in 1934 and dedicated in 1940, Newfound Gap served as President Franklin D. Roosevelt’s backdrop for his ceremonial speech opening the national park for all of the public’s enjoyment and use. The overlook, which was constructed for the President’s visit, still stands today at the summit, where Tennessee and North Carolina meet.

Where to Stay When Visiting the Smoky Mountains

The Smoky Mountains are such a unique and treasured experience for anyone visiting and our relaxing Smoky Mountain cabins in Gatlinburg and Pigeon Forge are the perfect place to enjoy all that there is to see and do. When planning your next Smoky Mountain vacation, be sure to plan your stay in a luxurious and amenity fill cabin rental in the Smokies! 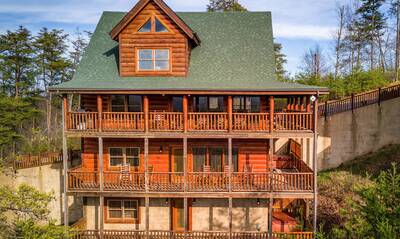